Dr. Kristen Stilt is an Islamic scholar inEgyptand has written a book about Islam and animals, endorsed by Dr. Professor ‘Abd Allah Mabrook Al-Najjar, Professor of Shari’a and Law Member of the Council of Islamic Research at the Al Azhar Univ

ersity. He says Dr. Stilt’s book is “excellent in its scientific content, accurate from the perspective of Islamic law, and beneficial.”

She writes, “In my studies of Islamic law, I have always been impressed by the extensive rules that require humans to treat animals kindly and with mercy. These rules are wide-ranging, and include significant protections for work animals like horses and donkeys, requirements that slaughtering be done in as merciful a way as possible, and commands to treat dogs and cats kindly. The position on animal welfare within Islamic law is an excellent example of compassion and concern for those who depend on others for their care. Islamic legal protection of animal welfare is truly a model for everyone.”

This is an important statement because few Muslims treat animals well. Every bird-seller, poacher, dog breeder, tangawalla (horse-cart puller) and butcher of animals, from chicken to cows and buffaloes, turns out to be a Muslim inSouth Asia. The point is not that they do it – the Hindus are no angels either – but that they believe that their religion sanctifies cruelty to animals. They abhor dogs and even educated Muslims who visit me make a racket if one of my dogs goes near them. They beat horses and donkeys to death, run illegal animal and bird markets.

Muslims should understand the amazing range of animal welfare that is required by Islamic law.

Islam is based on the principles of kindness, mercy, compassion, justice, and doing good works. These principles are seen throughout the texts of the religion – the Quran and the Hadith or examples of the Prophet – as well as in Islamic history.

The Prophet was kind and compassionate to all creatures. Ibn Masud reported: “We were traveling with the Prophet and he stepped off to the side when we saw a small bird with her two babies, and we took them. The mother bird came over and began fluttering in the direction of the Prophet. He said, ‘Who made her miserable by taking her two babies? Return them to her.’ When the Prophet explained the importance of kindness we returned the baby bird.”

Cruelty to animals is strongly condemned in the Quran and the Hadith of the Prophet and punishments are provided for it. Most of the Sahih Hadith collections have Abdullah Ibn Umar’s report, “The Prophet cursed the one who treated animals harshly.”  Al-‘Asqalani specified that “The cursing indicates that the action is prohibited. Whoever treats harshly a living being and then does not repent, God will treat him just as harshly on judgment day.”

Abdullah Ibn Umar reported that the Prophet said: “A woman went to hell because of a cat that she confined and did not feed or allow to feed.”

Kindness to animals brings a reward to the kind person. According to Abu Hurayra: “The Prophet said that there was a man who was traveling and he became thirsty. So he found a well and descended into it and drank, then exited, when he saw a dog panting and eating the ground from his thirst. The man said: ‘This dog has reached a level of thirst that I almost reached,’ and so he descended into the well and filled his shoe with water and provided the water to the dog. God thanked the man and forgave him of all his sins. The men listening to this story said: ‘O Prophet, will we be rewarded for assisting animals?’ The Prophet said ‘There is the possibility for a reward for helping each living being.’” In another Hadith, even a prostitute was forgiven for her sins for her act of giving water to a thirsty dog.

Compassion for animals is a basic part of Islamic law, history and culture. The Muslims established the first animal welfare organization and animal shelters and Islamic history shows that animal welfare was an exalted Islamic value. A thousand years ago Cairo, a flourishing city, had shelters reserved for the needs of animals. 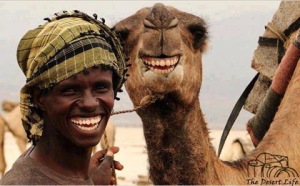 Historians document that Sultans, Amirs, and others established endowments to provide food for stray animals, such as cats and dogs. The English orientalistEdward William Lanereports that the Chief Judge ofEgyptin 1835 told him that the Mamluk Sultan al-Zahir  Baybars  established an endowment to provide food for stray cats. If the endowment was not producing enough revenue, the Judge would contribute his own funds.  The Ottoman Amir inEgypt, Kutkhuda, established  a  pious  endowment  to distribute food to stray dogs and cats each day.

Many Hadiths state that humans have a duty to treat donkeys, horses and camels properly and to respect the work they perform. According to Sahil Ibn al-Handhala: “The Prophet passed by a camel whose stomach was taut from hunger, and he said: ‘Fear God regarding your treatment of these animals, who cannot speak from themselves. Ride them properly, and feed them properly.’”

Other Hadith express how personally angered the Prophet was by neglect of animals. According to Abdullah Ibn Ja’fir Abi Talib: “The Prophet went into a garden of a man and there was a camel. When the Prophet saw the camel he felt compassion and his eyes shed tears. The Prophet went up to the camel and stroked him between his ears, and the camel calmed down. The Prophet then said: ‘Who is the owner of this camel?’ A boy from the ansār came and said, ‘He is mine, Prophet.’ The Prophet said: ‘Don’t you fear God with regard to this animal, whom God has given to you? For the camel complained to me that you starve him and work him endlessly.”

The Prophet even chastised his wife Aisha for her treatment of a camel she was riding: “Aisha rode a camel and she began to struggle with him. The Prophet said: ‘You are obligated to be kind.’

Many Hadith explain how to treat animals who are carrying you or your goods: “God is kind and loves and desires kindness. If you ride an animal, descend and allow it to rest at an appropriate site. You should provide the animal rest at night, because the animal is the one covering the trail, and needs a resting place for living beings.”

The muhtasib in medieval texts was the official responsible for public laws and overburdening or mistreating pack animals was treated as a violation of Islamic law. The muhtasib’s powers were to punish abusers such as the transporters who stop with goods in the market without unloading the goods from the backs of the pack animals “because if the animals stand with the goods on them it causes pain to them, and that is torture to them.”

In the law manual of Ibn Bassam, “It is also necessary that the animals’ loads and burdens are proportional to their strength and ability, and they should not have put upon them a load that will injure them, and they should not be driven quickly while carrying loads, nor prodded with strong prods. The people responsible for them should have the fear of God in them when it comes to providing food for their animals and they should be fed sufficiently according to their work, and whoever violates these rules should be punished.”

Good treatment of animals can result in a reward from God. According to Abu Hurayra, the Prophet said: “Giving a horse food or water is the source of a reward.” When the Prophet was asked about the reward that can result from the kind treatment of donkeys, the Prophet referred to the Qur’anic verse 99:7-8: “’Whoever does good equivalent to the weight of an atom shall see it; whoever does evil equivalent to the weight of an atom will see it.”

Maneka Gandhi is a six time Member of Parliament and ex-minister for Environment, Social Justice and Culture, Chairperson of the largest animal welfare organization in Asia People for Animals, and the author of entomological dictionaries including Hindu Names and Muslim Names published by Penguin.