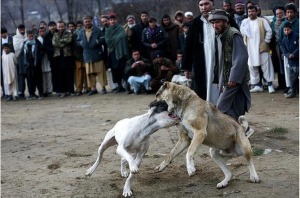 The arrival of “Chaiter”, a period from mid March to mid April in the Punjabi calendar, known for sprouting flowers and leaves unfortunately is also associated with “dog fights.”

Even though animal fighting is prohibited by the law of the land but in the rural areas the practice of camel, dog, quail and cock fighting goes unabated.

These days the fight of dogs is in full swing in Punjab. Chakwal district is one example where every day, a dog fight is organized.

On Sunday March 3, 2013, there was a dog fight in Mehro Pilo village, while a day earlier, another dog fight was hastily organized in Doray village. All of this happened while the police authorities looked the other way.

On the other hand, residents of Doray village were shocked when they suddenly noticed a huge crowd of people in the field.

A dog fight was to be held in Pindi Gheb but it was thwarted by the administration of the town. Finding no other option, the organizers of the event took the show to Chakwal by the help of some locals, involved in the nasty practice. Dhudial Police, despite aware of the show did not stop it.

Other dog fight events will be held in Kariala village falling in Saddar Police Station area on March 10, where dogs from across the country will participate in the event. 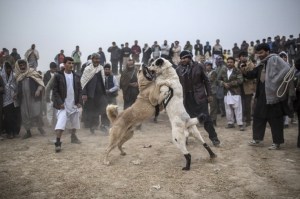 However, the District Coordination Officer (DCO) Ahmad Aziz Tarar said that he did not issue any approval. “We do not give approval for such shows. I would look into the matter”, he maintained.

On the other hand, the Spokesman of Chakwal Police, Raja Zohaib also said that such kind of cruel practices were held secretly. “We would check the issue and due action would be taken against those who are responsible for such kind of brutal practices”, he claimed.

Chaudhry Shabir, an avid lover of dog fights said that dogs of a special breed called “Boolhi” in local parlance were used for the fight.

“To keep a Boolhi dog, is like keeping a buffalo”, said Raja Haroon Gulzar, another keen observer of dog fights. “A dog needs 5kg milk a day, along with butter and meat”, explained Chaudhry Shabir.

The fight is being organised by rich people, particularly those who work abroad.

In Chakwal, people involved in dog fights, work in Western countries and return in the season of dog fights. The price of a dog ranges from 1000,000 to 1,500,000, while there is no specific prize as the biggest prize for the owner is the victory which satiates his ego as in the end it is only ego that matters.

It goes without saying that most of the interest in these fights is related to gambling which itself is strictly prohibited under law.