Given the accounts of recent events at the Karachi Zoo, one cannot help but become suspicious at the staff’s treatment toward the animals held at the zoo. On November 19, 2012, the Zoo lost its third Bengal tiger of four, marking the sixth death of an animal at the Zoo over the last few months. While the tiger is believed to have died of old age, the deaths of other animals remain inexplicable.

The 20-year-old Bengal tiger had been unwell for quite some time.

However, when he was asked about the recent deaths of other animals at the zoo, the director said that these animals might have died before he had joined the zoo. “I took over as zoo director in the first week of October and these animals might have died either before that period or when I just joined in,” he said. He confirmed the deaths of the female leopard and the Shetland pony only.

According to sources, the zoo used to have four Bengal tigers, two males and two females. One of the pairs had been brought to Karachi from Lahore in November 2004. The zoo lost three of them over the years and is now left with only one male Bengal tiger from the old pairs.

While a few months ago, the zoo had imported two pairs of Bengal tigers and white lions at a cost of Rs 17 million, the former were meant for the Safari Park and would be shifted there once their enclosure was ready.

This was the sixth death in the city zoo over the past few months as only recently the zoo had witnessed the deaths of a female leopard, a male Chacma baboon, a red deer, a Shetland pony and a nilgai (an antelope species) one after the other. The male Chacma baboon and the red deer lost their lives after being shot with a tranquillizer gun. The baboon fell to its death when it was shot off a tree. The red deer also had a similar death as it could not get up after getting a tranquiliser shot. Now, the zoo was left with three female baboons, the sources added.

The lone Shetland pony, they said, died after remaining under treatment for some time, whereas the nilgai died after suffering injuries in a fight.

Another matter that is sure to anger animal rights advocates is the capture of the Zoo’s wild female leopard that was initially kept in a turkey cage upon being captured from the Galiyat of Murree in 2006. The feline was then gifted to the city district government of Karachi by the Khyber-Pakhtunkhwa wildlife department. Astonishingly, a government agency that is, perhaps, expected to protect wildlife, captured the wild cat otherwise used to roaming freely in her forests.

In calling upon agencies to fight for the rights of our wildlife, who, then, should we to turn to?

Much to our chagrin, the story gets worse. The leopard somehow ‘lost’ its four canine teeth and no previous owner, not the Safari Park nor the Karachi Zoo, has any information on the missing teeth, which raises questions about the standards of record-keeping at the zoo. It also makes one wonder who pocketed the money from the potential sale of the canines. And, one does not even want to delve into the method used to extract the leopard’s teeth and whether the extractor was cognisant of the fact that animals can sense pain.

In all seriousness, zookeepers should be trained in having compassion for animals as the events unfolding in recent months dramatically point to its lack.

For we do not deserve the poor things, the animal haters that we are. While one has long seen and felt the plight of these creatures in the Citadel of Islam, the death of the young Saheli, the female Sri Lankan Asian elephant at the Islamabad Zoo shook the activists. 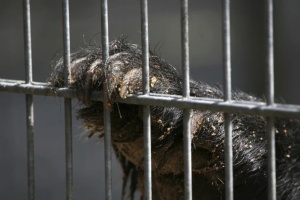 Note that whilst Asian elephants live to an average age of 60-some years, Saheli died at just 22 of a sore foot! I ask you! And what has the great CDA done? Suspended her caretaker mahout, Mohammad, possibly the only one who really cared for the animal as news reports suggest that he was crying like a baby at Saheli’s death, intoning repeatedly through copious tears: “She was only one year old when she came into my care, only one year old”. Does nobody else at the zoo, Mohammad’s superiors, carry any of the blame for Saheli’s death? I suppose not, for this is the Land of the Pure where the axe always falls on the weakest, most powerless.

One has lived all one’s life in this country and has seen the progressive decline in animal care; and a rise in cruelty towards animals in direct tandem with the rise in jihadism and religious extremism. Walk down any street and you will see that the very first reaction of most people to a passing dog is to cast about looking for a stone, or brick, or stick to throw at the cur.

Go to any zoo and you will see people torment the animals, specially monkeys and apes, by screaming at them, making faces at them; and if possible, actually prodding a leopard with sticks.

However, here we are talking about lay yahoos who would tease animals; what about zoo officials and veterinarians, the people actually in charge of zoos and the welfare of animals supposedly in their care? Stories are rife about the scant care that is taken in looking after the creatures. A giraffe died in Lahore zoo not too long ago because he had ingested a plastic bag, which had probably been thrown at him by a visiting yahoo.

Neither is any attention paid to inbreeding in the case of lions and tigers resulting in a shrinking gene pool that is producing sick and weak offspring. Inbreeding is widespread and is taken more as an exotic quality (as in White Tigers) rather than as a serious health problem. Indeed, one has seen tigers with such deformed features as are frightening to behold.

Here is an excerpt from a 2009 report Accumulation of Deleterious Mutations Due to Inbreeding in Tiger Populations by researchers Lauren Begamy and C S Criscuolo. “Biodiversity in a species is the amount of genetic variability within the species. Genetic diversity refers to the total number of genetic characteristics in the genetic makeup of a species. The loss of genetic diversity within a population can be due to inbreeding within the species. Inbreeding can lead to an increase in homozygosity in the population and cause an excessive amount of deleterious mutations.

“Tigers are one of the most inbred animals in captivity. Tigers carry a recessive gene that can cause some offspring to be white. For the white colouring to show, the tigers must be inbred. The constant inbreeding can lead to mutations such as immune deficiency, scoliosis, cleft palates, mental impairments, strabismus, and early death. Inbreeding of the tigers leads to a loss of genetic variation within the species which can diminish the chances of evolving if necessary.

“Current research shows the genealogy of all white tigers can be traced back to the very first white tiger. It can be proven that every white tiger is related to one another. Other research proves that inbreeding is the major cause of mutations in the tiger population and hopefully further research will be done on other possible mutations that could occur within the species.”

Whilst, for example, we don’t know how many of our tigers have cleft palates that make mere living hellish, mental impairments can be seen in any zoo in Pakistan with the animals pacing up and down their tiny cages, sometimes biting their own tails off; bears moving their heads maniacally from side to side; and wolves and jackals running like possessed creatures from one end of their enclosures to the other, over and over again.

Close down all Pakistani zoos I say, and gift the animals to countries that care for, and love animals. We are yahoos; we don’t deserve the noblest of God’s creations.

2 thoughts on “Animals Continue to Die in the Karachi Zoo”