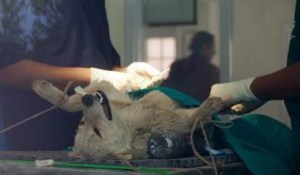 Also, there are many reports of animal abuse occurring in animal research laboratories: For example, People for the Ethical Treatment of Animals (PETA) filmed staff inside (an animal testing facility) in the UK hitting puppies, shouting at them and simulating sex acts while taking blood samples.

In the U.S. the numbers of rats and mice used for (animal testing) is estimated at 20 Million a year”.