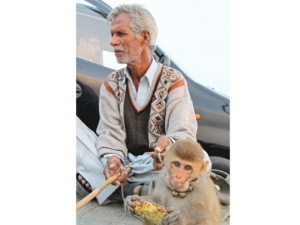 It has been four months since Muhammad Younas bought his monkey from Empress Market Karachi but the training is taking its toll on his monthly income.

Younas, 55, and his monkey are a regular fixture on the curb across McDonald’s at Sea View. Following the family tradition, Younas has been coming to the sidewalk with his monkey for the past 35 years and putting up an entertaining show for children visiting the beach.

After his trained monkey died in 2011, Younas rushed to Empress Market and bought his present one, whom he likes to call ‘Lalu’, ‘Kaddu Halwa’, and ‘Aalu Master’. Despite the affection, Lalu has not been able to turn in a performance that could overshadow his predecessor.

As the monkey stumbles and trips, Younas explains that his training his only “half done”. He trains the monkeys by tapping a stick on the ground and making them follow the movements.

While the act of enslaving monkeys and making them perform for money is extremely inhumane, Younas insists that he doesn’t make the monkey “jump up on cars”. “This is wrong,” he says.

Pakistan has little enforcement of wildlife laws, and trained monkeys are rife on the streets in urban centres. For men like Younas, there is, however, little choice. “I am too old to do mazdoori [labor],” he says. This is all he knows – having been in the business for nearly 35 years.

With diminishing finances and no one to carry on the line of work – Younas’ four daughters are married and live in the Punjab while his son is in the 10th grade and works part time at a shop – Younas worries about the future. His support, for now, comes from “people in Defence who give me money”.

The solution to his problems would be to just buy a trained monkey. “Those cost Rs 30,000,” he says, “and you don’t even get them here. You have to get them from the Punjab [many are procured near Murree], and there is the additional cost of travel.” On the other hand, a baby monkey costs only Rs 7,000.

Younas does not charge a fixed rate for each performance. “People give Rs 15, Rs 20 … or Rs 50 or Rs 100,” he says. “Some people even invite me for birthday parties, or television crews, who want this to be filmed.”

To add to his misery, Younas’ house roof is near-collapse. Halima Mansoor, who works as a freelance journalist and is coordinating fundraising efforts for him, first came across Younas when her family was looking for someone to give away meat to on Eidul Azha.

“I don’t agree with this,” she says, referring to the practice of training monkeys. “It’s cruel, but you don’t have a lot of choice. The way I convinced myself is that he does this in the nicest of ways,” Mansoor said, referring to the fact that Younas does not harass people by persistently asking them to look at the monkey.

For now, Younas’ Kaddu Halwa can only stand up, and jump up and down to entertain the crowd. There are months ahead before the monkey can dance to his tunes.